In my heart, I always knew I would have a Caesarean Section. I just felt I would. The topic had come up a few times during my ante-natal visits and statistically, I felt the odds were against me. One third of births. One in three.

At 32 weeks a GP at the surgery I attended examined me and announced baby was head down. I bounded out to waiting husband in the car and excitedly cried: “Head down, all systems go, this is great news!”

I was delighted that baby, with eight weeks to go, was already in the right position and patted my bump cheerfully. Good baby, I thought. Clever baby.

I finished work at 37 weeks, one week earlier than I planned. This was because I was convinced I would go into labour early. And because of the rib pain. It felt as though my torso was slowly being prised apart with a vice grips.

Staying active, I walked as much as I could. I was thrilled when husband brought home a bouncy ball and I spent hours, trying out all sorts of gymnastics on it in the sitting room. I got fed up. And when the due date came and went, I realised I’d spent the past three weeks in labour watch and it could possibly last another two.

At four days past due date, I attended the hospital for a scheduled check-up. The visit, which usually took an hour and a half, was turning into an epic waiting session. One by one, the other Mums-to-be were seen and left. I waddled up to the nurses to check on my file and found it at the very bottom of the pile. “You’re waiting for the specialist,” they said. Three hours in, with every other Mum gone home and the cleaners sweeping under my feet, I finally got to see the doctor. I was holding back tears. My whole life seemed to be a big long wait.

We talked about our options and I told him I was Ready, Ready, Ready. He was very kind and reminded me that babies were unpredictable and only came when THEY were ready. He put his hands on my bump to examine me and I felt his reaction shift a little.

‘What is it?’ I asked as he turned to grab the scanning machine

I lay there, not breathing while he swished the scanner on my belly.
Thoughts flooded my brain. Couldn’t feel the head? He didn’t mean… surely not… it was hardly a… breech was it?

‘So that’s a C-section,” I said, more to myself than to him.

I got up off the table, excited, tearful, annoyed.

“But baby was head down,” I wailed.

Gently he said it was likely baby had never been head down. “There’s very little room to move you see,” he said. “If we’d caught it earlier, we could have tried to turn baby, but it’s too late now.”

He got on the phone to arrange my Caesarean. It was Thursday. I presumed it would take place Monday, or Tuesday. I’d have the weekend to get ready.

“Tomorrow?” he said to the person on the phone.

He gave me forms and I left half-running to go get my bloods done. The nurses outside helped me fill out one of the forms and I watched them write down tomorrow’s date; my baby’s birthday.

Bloods done, I flew through the corridors, desperate to get out of the stuffy hospital. The husband met me outside and I burst into tears, not able to speak. He thought something was really wrong, and I felt so guilty delivering the news that there was nothing wrong, not really, but tomorrow, we were having our baby.

We went for dinner that night, our last night as a couple, and I got everything ready at home. We were to be at the hospital at 7am and I didn’t sleep more than twenty minutes the whole night.
In hospital, we were shown to a bed and I was given a gown and stockings to put on. I was sent for a scan to ensure baby was still breech, I signed more forms and settled in for a wait. It was 8.15am.

I was scheduled to be in theatre for 11am. I felt alert. Well. Excited.

A nurse popped her head round the curtain. “Are you ready to go now?” she asked. “We can take you.” Thrilled that we would be meeting baby even sooner than we expected, I walked in my dressing gown through corridors down to theatre. I thought I’d be in a wheelchair. It felt weird to be walking in to hop up on an operating table.

Husband was told to wait outside and given some very fetching blue scrubs. I was taken into a pre-room where I met the team. One of the nurses knew me and I felt immediately relaxed at her smiling face. Another nurse stroked my hand. I wasn’t nervous. And everyone was in good spirits.
On the operating table I sat while a cold wipe was applied to the base of my back and the spinal block was put in. I thought I’d wince or jump with the pain, but I didn’t feel it at all. “That was grand,” I announced.

Lying down, they strapped my arms outwards, in a fashion that can only be described as Jesus On The Cross. There were lots of needles and tubes going places and everyone seemed to have a grip of some part of me. I breathed through it – using my learned labour techniques, to stay calm in what seemed like the brightest room in Ireland.

Someone started rubbing my thigh. “Can you feel that?” they asked.

“Wait!” I shouted. I can still feel you rubbing my leg. I can feel it!”

I thought they had got it wrong. I thought they didn’t allow enough time for the pain blockers to kick in. But in some miracle medical way they have, I had feeling, but no pain. They were nearly at baby. Husband was brought in. He gripped my hand. “You’ll feel some tugging,” they said from behind the blue curtain. I couldn’t really feel anything at all. Except the tears. There were tears rolling down the left side of my face.

“Dad, do you want to see,” they said, masks muffling their words.

Dad stood up, peering and in a choked voice, whispered, “Girl.” 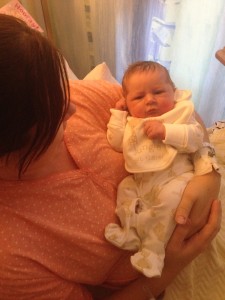 And there she was. Pure white. Glistening. Held across a doctor’s gloved hand, her whole body scrunched up, while she let out a little cry.  She reappeared dressed in a tinfoil spacesuit, with a little hat on her head. I could only stroke her face, and look at her, my arms still strapped down. I listened to the medical staff talk about their plans for their weekends, as the drugs whizzed up and down my system. I watched them count bandages soaked in blood, my blood, and pop them into plastic bags.

And then I was gone. Separated from baby and husband, strapped to a moving bed, flying through the corridors at what felt like a zillion miles an hour. My head was spinning. I was in recovery, beside a crying boy. I tried to talk normally to the nurse, but I probably wasn’t making sense. I felt woozy. And so itchy. She gave me an anti-histamine, but the itch remained.

I watched a large clock in the recovery room tick by. How long? I asked her. She checked me and rechecked me. And finally, an hour and a half later, it was time to go meet my baby.

I was put on a semi-private ward and I greeted my husband who was holding the bundle in his arms. He’d dressed her and held her for the past hour, speaking gently to her, telling her about our world. I was ecstatic. And I felt no pain whatsoever.

I cuddled her tight and was able to breast feed her soon after. It was only later that I realised we didn’t have any skin-to-skin until the second day, when I undressed her and held her close. I wasn’t sure what to do with a newborn, and didn’t feel it was right to unwrap a sleeping baby. Every fibre of my body wanted to scan each part of her, to take her in and check her over. But for the first night, attached to drip and catheter, there was no leaving the bed. When it was time to feed her, I had to get a nurse to hand her to me. And I felt like I was bothering them.

As friends and family arrived at the hospital over the following days, I described my birth experience, which I recounted as wonderful, dignified and fabulously organised. What I didn’t realise or take into account, was the recovery.

At home, having left the hospital, I could barely walk up the stairs. My abdomen didn’t have the power to lift my legs up. Sitting down, felt it would tear open my stitches. And it was difficult to try and feed baby on top of the scar. It was weeks before I felt fit enough to go for a proper walk. And not being able to drive, with a newborn at home, felt like a prison sentence.

When I look back on the experience I am glad that I had a planned section. I had one evening to get my mind round losing the natural birth that I’d hoped for. It ensured the safe arrival of my baby, and my own safety too.

What annoys me are the variables in the story. What if I hadn’t seen the specialist on that fateful day? The baby’s breech position had already been missed by at least three fully trained doctors. Had my breech baby been picked up like it should have, I might not have needed major surgery and a five-day stay in hospital.

But, I still recall my first baby’s birth as an overwhelmingly positive experience. And I have a beautiful scar – a large smiley face, poking out over my knicks, reminding me forever more, of the best day of my life. Better than any tattoo. Wouldn’t you agree?