Elizabeth from Life on Hushabye Farm shares the journey which led to her delivering her four children by C-section as well as sharing some valuable lessons in delivering babies by C-section:

On my first pregnancy I followed all the usual patterns, I imagined the middle of the night dash to hospital, the ‘epic’ breaking of waters, the monumental effort of delivery and the arrival of my little baby.

However, as is often the case in life, it did not pan out as I had imagined. My due date came and went, every day seemed like eternity and eventually at 10 days overdue I was brought in for an induction. It had never occurred to me that an induction could fail, but fail it did. Three days, 6 insertions of gel, 2 attempts to break my waters, and not so much as a twinge.

Defeat was finally admitted and at 13 days overdue we were told I needed a section. At this stage I just wanted my baby, my dreams of an intervention free delivery were in tatters but all I wanted was my baby delivered safely so I was happy to agree.

The section itself was very calm, very organised ( this appealed hugely to my inner control freak!) and I felt very reassured.

I was nervous when they were doing the spinal block and I immediately felt very nauseous and got sick, this was due to my blood pressure dropping and they were able to sort this very quickly.

The procedure was longer than I thought it would be, and the feeling of tugging took me by surprise. They also had to use a forceps to get her out which I wasn’t prepared for, she really was determined to stay in there!

Once she was out and put in my arms all the usual emotions overcame me.

However I was given morphine after the spinal was reversed and this made me feel very out of it. Like being drunk but with an awareness that I wasn’t making sense! I feel that I missed those first few precious hours with her as I can’t quite remember them.

I had very bad itching on my arms and face after the spinal block, this is quite common and an antihistamine injection soon settled it.

Thankfully my recovery was very quick and I was back driving, with doctors approval after 10 days.

There were many days afterwards that I felt I had missed out on something amazing. People tend to eulogise vaginal birth and be very dismissive of a c section birth but I made peace with it because I had my gorgeous girl and wanted for nothing more.

This was only the beginning of my C Section journey, I have gone on to have 3 more section deliveries. 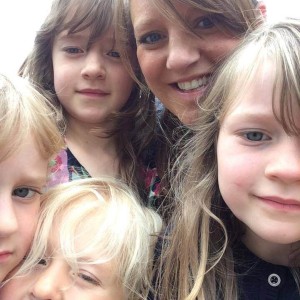 I have never had a labour pain, I have never even had a Braxton hicks! With each delivery I have learned something new, I found communication was key to making each experience a positive one. It is important to ensure that you speak not only to your consultant, but to the team as they prep you for the section. I took what had happened in the first section, with my drop in bp and the reaction to both the morphine and spinal block and ensured they didn’t happen or were quickly treated in my subsequent sections.

There is so much information around vaginal deliveries and so little regarding section deliveries.

Here are some of the things I’ve learned.

Remember C-sections are the other option for giving birth, not the lesser option.

Elizabeth is a four-time C-section Mum, she lives with her husband, four children and many Alpacas at Hushabye Farm in the Midlands of Ireland.  She also manages to work as an Optometrist and blog about her family life on Life on Hushabye Farm.  Find her on Facebook and Twitter.