Michelle writes about her four C-section births which resulted in seven babies all in the space of four years!

I was 8 weeks pregnant when I started getting bad pains in my lower left side and thought this isn’t right I need to get checked out. I went to my GP who sent me to the hospital for a scan as they thought I may be having an ectopic pregnancy.  By this time I was scared and worried all in one. I laid down on the bed and waited for the cold jelly then I nearly fell off the bed as the doctor said well it’s not an ectopic pregnancy, it’s twins.

All I was thinking was how are we going to deal with 2? How’s my partner going to take it as he was working at the time in Dublin and I was working in the UK.

I phoned to tell him the news and he was on the first plane over to me. Things were going great till I got to 15 weeks when I had a bleed.  All that went through my mind was I’m losing them. We rushed back to the hospital where they did tests and more scans.  The babies were fine but i had a low-lying placenta which caused the bleed but was told that it could move up further into the pregnancy.

I went home to rest for a few days before going back to work. Again things were going good.  I was blooming quicker than I could breath till one lunch time at work I started to feel unwell with pains in my lower back and my tummy. I started cramping. I was taken to the bosses office where they called me an ambulance and my partner.  They both arrived at the same time.  This was it, I was in labour but I was only 25 weeks. When I arrived at the maternity ward they tried everything to stop the contractions; tablets every half hour but nothing was stopping these babies from arriving. I was rushed to theatre and put under a general anesthetic as I still had the low placenta. Adam and Anthony were born at 6.35 and 6.37pm weighing 2lb 4oz & 2lb 3oz and rushed to the NICU. The boys had a rough few weeks.  Both had complications Anthony had Nec and had 18cms of his bowel removed, he also developed strydor and had to have his windpipe widened.  Adam had a bleed to the brain which didn’t correct itself and now has a shunt fitted with grade 4 hydrocephalus cerebral palsy and epilepsy but they are both 6-year-old happy boys. 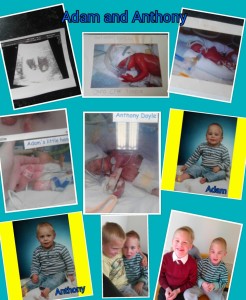 Ten weeks after having my twin boys we found out I was pregnant again. I nearly died but thought it’s our fault we have to deal with it. I went to my GP again to confirm that I was pregnant again.  It wasn’t the stress if the boys being in the NICU, it was positive. I was expecting.  They rushed a scan appointment through for me to make sure things were OK and to see how many I was having.

At 10 weeks I went for the scan and this time it was just the one. We decided once the twins were out of hospital and they were healthy to travel that we would move back to Ireland to be closer to family. I was 8 months pregnant and had 11 month old boys and moving across the water.  It was a big strain on us but we did it. When we got here Adam was vomiting badly.  We thought it was the travelling but because of his shunt we took him to the hospital in Crumlin to be checked out.  They very quickly transferred us to Temple Street Children’s Hospital to the Neuro team who looked after us extremely well.  He was in for a week but the day before he was discharged I was getting that same feeling I did when I had the boys; bad pains in my lower back and my tummy started cramping. I spoke to the next nurse that came in as I was bent over the spare bed in the room.  She took one look and pulled the emergency bell and rang for an ambulance. When the crew got there to take me all I remember is a nurse saying never had an adult taking out of a children’s ward by ambulance before and the paramedics saying that I wouldn’t make it to the Coombe Hospital I’d be going to the Rotunda Hospital as it was closer.

I was rushed to the maternity ward where they put an epidural in and monitored my progress the contractions were coming thick and fast but I wasn’t dilating.  After a few hours the doctors said that they would take me upstairs to have a section.  At least this time my partner was with me.  I was also awake this time to see Andrew born at 39 weeks weighing 8lb 7. He is a perfectly healthy boy who is now 5 yrs old.

The third pregnancy really didn’t come as a surprise to me.  We moved from Dublin to Laois when Andrew was 2 weeks old, the twins had just turned 1, and we were getting our own home. I was 4 months post pregnancy to discover the 2 lines on the pregnancy test. So off to the doctors again, early scans again, the same routine. The day of the scan came, I’m on the bed waiting for the doctor to say there is the baby only this time it was “there is one and there is two”

I looked up and said “are you messing?”  “No”, she said and showed me the screen.

Oh well, we did this once we can do this again but this time instead of 3 children under 1 we would have 5 children under 2. Keep calm deep breaths we can do this. The pregnancy was flying in. I got past 25 weeks which was a bonus but I knew with twins they would be early.

At 29 weeks I was rushed on blue lights to the Rotunda as the Coombe had no space for two babies in their NICU. I was taken straight to theatre where Lilian and Luke were born at 29 weeks at 9.37 & 9.42pm  weighing 4lb 6 and 3lb 10. NICU asked if I had my dates correct as they needed no help with their breathing, they were acting more like 32 weekers. They had no complications at all and were home after 5 weeks. They are now happy healthy 4 year olds. 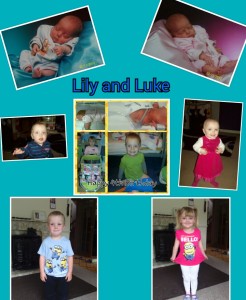 It felt like I had a break from being pregnant for a while. I had gone 8 months pregnant free.  It was the New Year I found out again. We went through the same routine again; Doctors, scans and same results; another twin pregnancy.

WAIT, WHAT! Another twin pregnancy. I cried but not sure for happiness or shock.  Either way I was going to have 7 children under 4 when the last two were due to be born. Oh how wrong was I. My body really didn’t like having more than one inside this time and I only got to 24 weeks.  This had to be the most terrifying one yet.  Once we got to the hospital after having a Garda escort through Dublin (as the woman’s mini marathon was on) the only thing they and I had time to do was to sign the consent form to have my tubes tied at the same time as they did the section.  One trainee doctor asked was I sure. I very politely said I have 5 children under 3 at home I’m sure I’m not having any more.

At 6.30 & 6.31pm 2lb and 1lb 12oz Ollie and Olivia were born. 7 children under 3 but I didn’t care, they were here and all healthy and being looked after by parents that loved them. They are now happy 3 year olds. 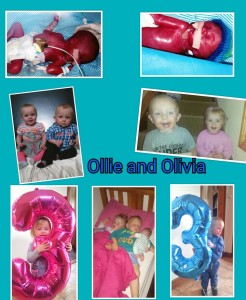 So that’s my story of 4 c-sections in 4 years.  Yes times were hard and scary.  Every section was different from going in to the recovery but I did it and wouldn’t change it for the world. 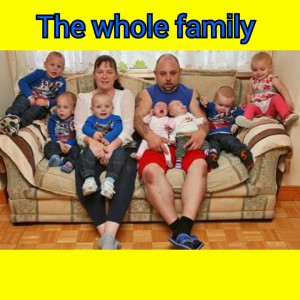 When I asked Michelle if she wanted to write anything about herself she said “Sure I’m just a normal Mam like everyone else!”  Thank you so much for sharing your amazing story Michelle.

It was with great sadness that I heard of the death of Michelle’s husband Christopher.  If you would like to help this incredible family get through this awful time in particular to help them fund a 9 seater car now that there is only one parent to drive the kids around you can donate on their Gofund Me page.

All images reproduced with kind permission.