I found out I might have to have a caesarean section at one of my monthly scans. I was a private patient and so saw my consultant on a regular basis. This was a big relief for me as a first-time mother. I would spend each month before my scan worrying so monthly scans made a real difference to my stress levels! However, on this particular occasion I had not expected anything out of the ordinary. My husband was busy that day and so I went by myself. I never made that mistake again. Typically this was the one time I could have used some support.

My consultant told me that my placenta looked quite low and that a c-section might be necessary. He couldn’t say for sure as it was still too early but he just wanted to make me aware that it was something I might need to think about. I smiled at him, left the office, reached my car and burst into tears. I rang, naturally enough, my own mother – the repository of all our emotional meltdowns! She managed to calm me down as I was due back at work. I really should have just gone home but back then I worked in an early years setting so felt I couldn’t take the rest of the day off. I told everyone at work what happened as they could see I was upset and nobody was very reassuring. I think we all assumed this was the worst thing that could happen to anyone! Of course I know better now. I was really lucky to live in a time and age when this medical procedure could save my baby and myself.

Over the next few months numerous scans showed the placenta wasn’t going anywhere yet the section itself wasn’t actually scheduled until the very last minute; my consultant kept reminding me the placenta could still move! To be honest by the end of my pregnancy I didn’t want it to move. I was now mentally and emotionally ready for the section and hadn’t prepared at all for a vaginal birth. I don’t think I could have coped if it had moved!

At one of my last scans I was informed I would have to be put to sleep for the procedure as the position of the placenta meant there was a high chance I would need a blood transfusion. This was shocking but I took it on the chin and tried to make the best of it. I was upset, though, that I wouldn’t be awake to see my baby born and my husband would not be allowed in the theatre with me. So a medical team would be the first to see my baby’s face. That was hard to come to terms with.

The day of the section itself was very straight-forward. We arrived at the hospital at 7am and were checked in. The part I remember really well was trying to pull on the compression stockings. This, at least, gave us a giggle! The last photo of me with a bump was taken while I lay waiting. I am giving a thumbs up to the camera but I was very nervous!

I didn’t really get a chance to say a proper goodbye to my husband as I only realised at the last minute he wasn’t following me into the room. I was then asked to get up on the bed and given the anaesthetic. The last thing I remember is hearing someone checking they had enough units of my blood type on hand. My consultant was there and he was lovely. Everybody was very reassuring. I drifted off and when I woke up I was in a lot of pain and my baby was nestled in my husband’s arms! 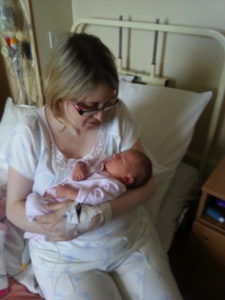 Honestly I don’t remember too much about that first day as I was put on a morphine pump to help with the pain. However, I have to say everything went well. I didn’t need the transfusion in the end and I discovered the recovery wasn’t as bad as I had thought it would be. You hear a lot of stories about how long recovery can be but I never found it that bad. I kept on top of my pain medication though and I do feel this made a difference. Also my mother stayed with us for two weeks after to help out and, as it was my first baby, I could rest when I wanted to.

All in all I had quite a positive experience. The only thing is I do find it hard to say I gave birth but I’m working on this and encourage other c-sections mamas to say it! I did give birth! 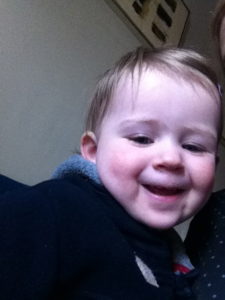 Ann Marie is a 35 year old mum to a two year old girl who loves teddies, tea parties and toy cars. She keeps (somewhat) sane by blogging about life as a mum, drinking tons of coffee and staying up late to watch The Goldbergs. She works as a freelance writer in her spare time i.e. nap time and is currently working on a picture book aimed at small children who are learning to potty train. She previously worked as an early years educator and this is a big issue amongst that set! You can find her at (mis)Adventures in Toddlerdom waxing lyrical about everything and anything. You can also find her on Facebook and Instagram